It's been 3 months since the last version, but this one is worth the wait. This version completely reworks Geneshift's progression system, changing how you level up, how you unlock things, how XP is earned and more. It introduces a new currency called "Kill Coins" which are used to unlock items, adds the concept of "personalised difficulty", and features a new daily challenges system. Best of all, the menu has got a total makeover and now looks gorgeous! Check out this before and after pic! 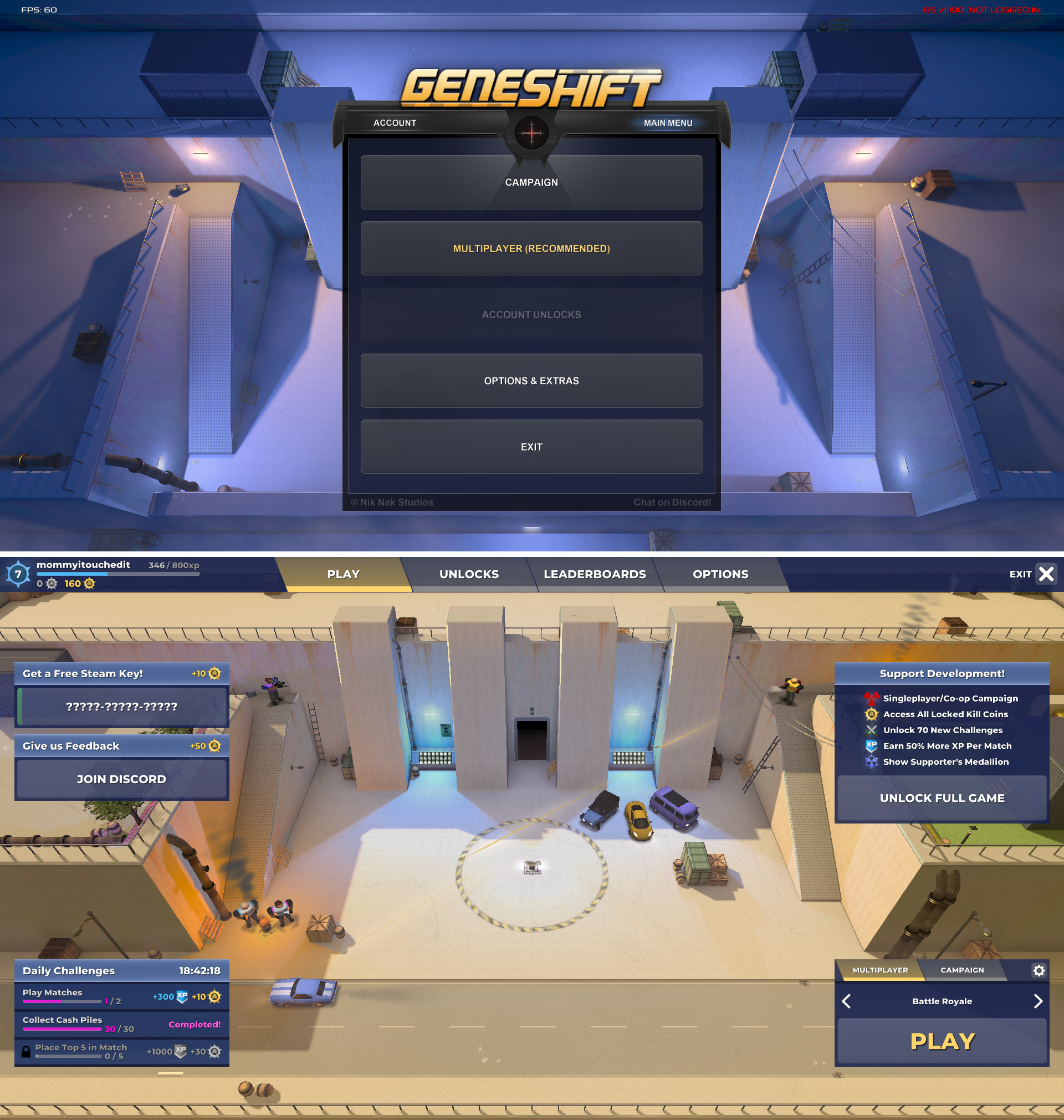 New Menu
The new menu system not only looks better but is significantly easier to navigate. There's a big play button which will auto-join you into the ideal server, daily challenges shown on the left, and every other page has been polished up too. Up the top left we see your current level and XP displayed, along with any kill coins you've earned (more on that later). Specific pages of the menu have been reworked too, such as the challenges page.

The challenge page shown below not only looks swish with it's new hex layout, but changes how challenges are earned too. You can now complete any challenge adjacent to one you've already completed (in the picture below the pink are completed and the blue are able to be completed). This lets you slowly work your way down the challenge grid, and move diagonally from challenge to challenge. This is a big improvement over the previous design where if you got stuck on a challenge it would completely prevent you from claiming any challenges below it. 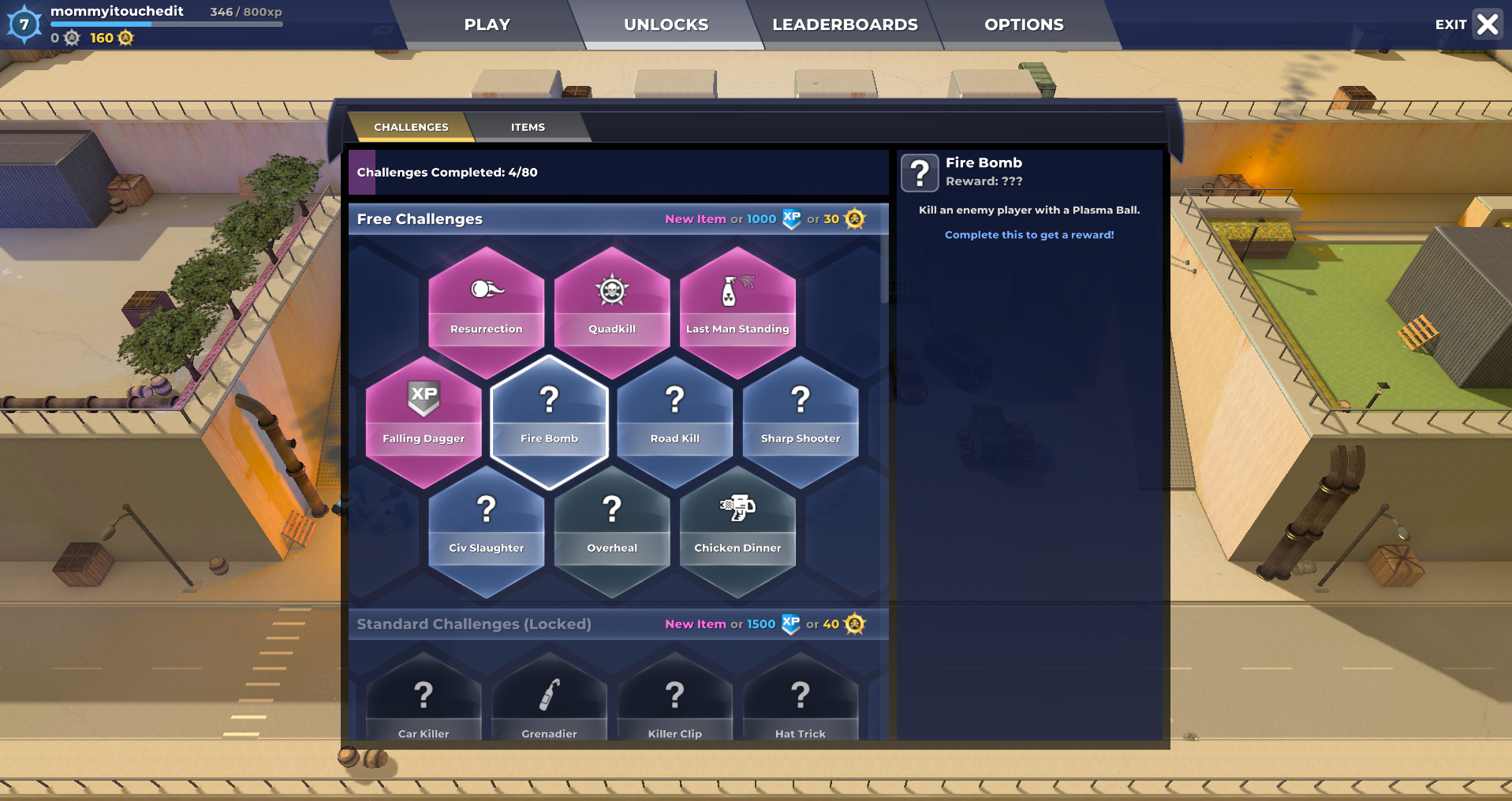 Daily Challenges
Speaking of challenges, the main menu now shows 3 new daily challenges. These new challenges are a great way to earn extra XP and kill coins (yes yes, more on that later..). After you complete a challenge it will reset with a new randomly chosen challenge at 0 UTC each day. Also everyone will get the same challenges, which I'm hoping will result in some ridiculous days where everyone is exclusively using sniper rifles to try complete the "Get 10 sniper kills" challenge. These challenges are a lot of fun as they always give you something new to aim for each day.

New XP System
The XP system has been completely reworked. First of all, you can now go all the way up to level 100. Your level is shown above your head in-game and represents how much XP other players get for killing you. It's a great way to show off your progress and make others fear you, while also valuing the high XP bounty on your head. Every time you level up you will gain +15 kill coins which can be used to unlock items. The XP you earn each day is also used to compete in the daily leaderboards, and the 20 players who earn the most XP each day will receive additional kill coins.

Personalised Difficulty
One fun new way to earn extra XP is by playing on a harder difficulty level. This will result in facing more difficult but also higher level bots, and these higher level bots will award more XP whenever you kill them. The cool thing about this new difficulty mechanic is that it is personallised just to you, so you can choose to play on Insane difficulty, whie someone else in the server can play on Standard. This allows veteran players to have a challenge and farm bonus XP without forcing newbies to die to aimbots.

Kill Coins
Kill Coins are the new main currency that you can earn. They are used to unlock items which gives you the main sense of progression in the game. Items used to be unlocked with XP but this was quite confusing, as normally players don't expect to "spend" XP and see it go down. So now instead, XP makes you level up, and when you do that you gain +15 kill coins. You also gain kill coins for completing daily challenges and regular challenges. You also get them by topping the daily XP leadboards.

Items are now arranged in a hexagonal grid, and like the challenges, you can only unlock an item that is adjacent to one you've already unlocked. Players can snake their way down the list, picking and choosing which items to get. This adds an element of strategy in the way you progress your account. Do you rush vertically down the list to reach the top-tier skills and weapons? Or do you unlock the significantly cheaper items up the top first?

The previous version also had the concept of "item discovery" which has now been removed from the game. You no longer need to randomly discover an item in the map before you can unlock it (which could sometimes take forever and was frustratingly random). Now you can unlock anything as long as you've reached it in the hexagonal grid and have earned enough kill coins.

Other Cool Changes
There are plenty of other changes too. I'll list some of the highlights below: