Steam integration. I bet you never thought you'd hear these words. It's been over 2 years since Geneshift was Greenlit and only now am I getting around to integrating Steam. But the time has come! We're on the home straight now. Today I started integrating the Steam API and am doing some basic testing. It's actually looking pretty straightforward. Much easier than I anticipated.

The main bulk of my time will be spent creating Steam Achievements. I would love some ideas on what achievements to make, how many to make, all that stuff. From looking at other similar games (ie Hotline Miami) I think about 30 achievements is a good goal. Maybe more, but creating the art assets for the achievements takes time. Anyway we'll see what we come up with. Ideas welcome!

There is also the concept of "hidden achievements" which only show the description AFTER you complete them, but not before. So you don't work towards them, but after doing something cool they just randomly pop up. These would be fun to think about too. Though honestly if someone could explain this whole process to me that'd be awesome, because I haven't actually played a game on Steam in a long time (GS is all I need).

Anyway here are a few achievement ideas off the top of my head. We want to think of things that are both fun, but also incentivize players to try out more areas of the game. Gimme ideas people!!

viewtopic.php?f=4&t=3772
Various people created various lists. The whole kill quest achievements aren't that fun, but others may be interesting.

Quote:
Neutralize an enemy chemical
Isn't that already in the Newbie Checklist?


Quote:
Get a Quad Kill combo
Get a Multi Kill combo
Get an UNSTOPPABLE combo
I hate achievement chains where in doing one, you can get 2 previous by doing the same thing.


Qwertybeef wrote:
http://geneshift.net/forum/viewtopic.php?f=4&t=3772
Various people created various lists. The whole kill quest achievements aren't that fun, but others may be interesting.
I think milestones for measuring your career are fine. Like killing 1000 players, reaching 1000 CCs, reaching Rank Qwertybeef... An achievement for killing the dev is always interesting :p

just slap some funny witty names on them

set x chemicals in one game
destroy x chemicals in one game
capture a control point while being under fire
kill each player in a game at least once once
kill somebody with dot/explosion while being far away (or dead)
teleport away while being under enemy fire
detect (say with shockwave, or by any means) same invisible player x times in a row
shoot and kill an invisible player
kill somebody with their own gun
win a shootout on low hp (basically get a kill on low hp?)
buy a superweapon
reach some hard to reach locations (if there are any on reworked maps, i didnt look for them)
die in a burning car
have somebody die because you ignited their car
kill a player from a window of a moving car
kill x players with a car
play a full game of team deathmach as a merc
rank milestone achievements

I forgot to mention how Hidden Achievements work. Basically, when browsing achievements you can see the name of it, but instead of a progress bar / unlock requirements, you see a description which can be anything from "???" to "In the name of Lord Gaben, there is something here..." or offer an actual hint like "This achievement marks great contribution to the community"

"This is just a reminder, bencelord is watching you" Play online coop.
"Trollcelot strikes again" Have played in a previous version where the game name was since changed.
"Your prize is FUN. Right?" Play a Ranked match against the highest rank, from start to finish.
"SHIBE WOW are you OK giggle mate?" Complete Insane Stage 10 with 5 or more players.

Those are intended to be hidden achievements, but work either way.

Good ideas guys! Lots of fun things here. I'd like to put in as many as possible, but the artwork is going to take time. So I have to think of a fast way to do this. I guess I'll just use the same format that the icons for weapons, skills, etc have.

Thanks for the explanation Aster. Do you know if hidden achievements count towards your total game completion? Like if you get all the normal ones but not the hidden does your game completion show as 100% or something like 83%?

And I had a slight misconception. Apparently on normal achievements you can do as I describe, replace any progression bar with an irrelevant description. Hidden Achievements simply won't show up on steam unless you unlocked it. Given the choice, I'd refrain from many hidden achievements, since they'll likely be posted on wikis if it's too hard, and spoil the fun.

Up to 9 achievements possible with this idea:

It is good because it adds value to Medal unlock. You know when you kill person who wears that it costs more (and you know when u wear it, u also cost more)

That's a good idea Max, instead of a "kill the dev" achievement, make a "kill a Ruby" "kill a Diamond" player etc. As you say it makes the CC system more relevant too.

Atm I'm just trying to think of how the achievements will look. I'm thinking of giving them a fairly consistent theme just to save time, using the red radiation logo. Something like this: 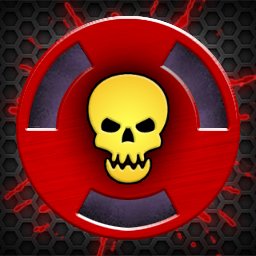 I'm also wondering for people who game on Steam, when a friend gets an achievement it shows up as a notification right? Does it show the logo of the achievement too? Or just the name like "bencelot got an achievement in Geneshift". This is really the most important reason for achievements, it's basically free advertising. But I haven't played on Steam in so long that I've forgotten exactly how it appears.

Achievement Icons don't tend to be so glaringly contrast... Something simpler, like what you do for the in-game skill icons(Vampirism, AA, BT, etc) would be enough, and probably best looking imo.

As for free advertising... It doesn't work like that. You have to navigate to your Activity thread, here everything your friends and subscribed items/groups are doing pops up in a time log. I presume that no one ever really goes there anyway, as you only really need the Store and Library pages.

Ahh yup, I saw Qwerty's screenshots in the chat. So not so much free advertising. Nevertheless I want something bold so it sticks out a bit for those who do go there. Mostly I want to encourage people to explore all the areas of the game. Finish a campaign, do some missions in PvP, earn a rank etc. And of course there will be some fun ones in there too